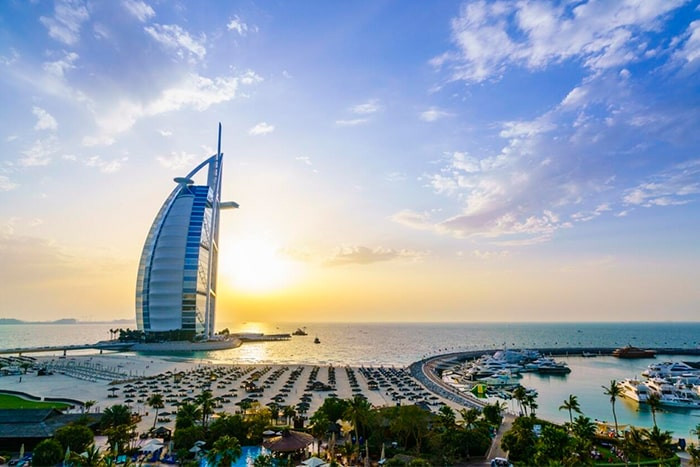 This places the city firmly on track for a momentous year while reaffirming Dubai’s position as the first choice destination for global travellers. Dubai also ranked No.1 globally in hotel occupancy in the first quarter of 2022, with 82%.

Sheikh Hamdan bin Mohammed bin Rashid Al Maktoum, Crown Prince of Dubai and Chairman of The Executive Council of Dubai, said: “Dubai’s ability to surpass other major global cities in key tourism indicators demonstrates the success of the far-reaching vision of His Highness Sheikh Mohammed bin Rashid Al Maktoum, Vice President and Prime Minister of UAE and Ruler of Dubai, to create a hub for business, investment, entrepreneurship and tourism that rivals the world’s best.

"The strength of His Highness’s vision and his steadfast determination to make it a reality have enabled Dubai to overcome the most complex global challenges, including the repercussions of the recent worldwide health crisis, to create a destination that offers rich value for travellers whether they are visiting for leisure or business.”

According to the latest data released by Dubai’s Department of Economy and Tourism (DET) at the ongoing Arabian Travel Market (ATM) in Dubai, the first quarter international visitation reflected the best Q1 performance since the global pandemic, creating a clear pathway for the city to progress towards its coveted goal of becoming the world’s most visited destination.

March 2022 was a particularly exceptional month for post-pandemic tourism arrivals, as the city welcomed 1.78 million international visitors, a 11 per cent increase over pre-pandemic visitation.

With the easing of travel restrictions around the world, Dubai’s traditional source markets delivered impressive tourism volumes in the first quarter. Regional markets continued to make an impact on international visitation, further underscoring the success of Dubai’s diversified multi-geographic strategy.

Mena and GCC collectively contributed to 35 per cent of the total volumes, reflecting Dubai’s continued appeal to travellers from proximity markets. Catering to the family-dominated GCC tourists were a host of attractions, retail, sporting and entertainment events. Western Europe accounted for 24 per cent of Dubai’s tourism arrivals, while South Asia accounted for 14 per cent of total international visitation.

Dubai hotels achieved significant growth across key hospitality metrics in Q1 2022 with Average Daily Rate (Dh649), Guests’ Length of Stay (4.3 nights) and Occupied Room Nights (10.22 million) exceeding pre-pandemic levels. In Q1 2019, ADR was Dh498 while Guests’ Length of Stay was 3.5 nights and Occupied Room Nights was registered at 8.63 million. Continued domestic and international investment into the sector helped further boost hotel inventory, with an eight per cent increase in the number of hotel establishments and 10 per cent growth in the number of rooms compared to the corresponding period in 2021. Dubai’s visitors and residents are now able to choose from a total of 769 hotel establishments and 140,192 rooms, compared to 716 hotels establishments that were open with 117,434 rooms in Q1 2019.

In the first three months of 2022, hotels achieved average occupancy levels of 82 per cent, which is almost on par with the occupancy levels of 84 per cent for the same period in 2019. In terms of hotel occupancy, Dubai ranked No.1 globally in Q1 2022, ahead of other international destinations including London (56.0 per cent), New York (55.3 per cent) and Paris (51.2 per cent), according to data from hotel management analytics firm STR.

Building upon the city’s drive to further diversify its offerings to ensure a broad choice to travellers of all ages and interests, Q1 2022 saw the opening of new attractions and leisure landmarks including the Museum of the Future.

Dubai also continued to capture a raft of awards and recognition from across the industry, elevating the destination’s global reputation. Dubai’s recent selection as the world’s most popular destination, the No.1 destination for ‘City Lovers’ and No. 4 destination for ‘Food Lovers’ in the Tripadvisor Travellers’ Choice Awards 2022 speaks volumes to the city’s endless appeal to diverse audiences from around the world.

Dubai’s reputation as a global gastronomy hub was further bolstered by the announcement of the launch of Michelin Guide Dubai in June and the arrival of the renowned fine dining food critique brand Gault&Millau.

Furthermore, 16 of Dubai’s restaurants were recognised in the inaugural edition of Middle East & North Africa’s 50 Best Restaurants in February 2022. Dubai is home to more than 12,000 restaurants and cafes that serve food and beverage drawn from the cultures of over 200 nationalities residing in the city.

Dubai remains committed to maintaining its position as one of the safest destinations in the world, with the UAE being one of the most vaccinated nations with more than 97 per cent of the population vaccinated and achieving No.3 position globally in Bloomberg's Covid Resilience Ranking.

Issam Kazim, Chief Executive Officer, Dubai Corporation for Tourism and Commerce Marketing, said: “Dubai’s continued success as demonstrated by the Q1 2022 results validates the strategic framework that was put in place at the outset of the pandemic to implement the highest levels of health and safety, further reinforcing the trust that UAE residents and global travellers place in the city as one of the safest destinations in the world.

"Our commitment to safety and the strength of our government, public and private sector partnerships, as well as our effective promotional and marketing outreach, have been fundamental in fuelling growth during this period. As we are in the early stages of what promises to be an outstanding year for our tourism industry, we will continue to maintain constant dialogue with both our domestic and international partners to sustain Dubai’s multifaceted global appeal throughout 2022 and beyond.”

In addition to ATM 2022 and the ongoing Dubai Food Festival, the city is set to substantially increase tourist arrivals by leveraging other major events in 2022 including the 25th edition of Dubai Summer Surprises, the region’s biggest festival of its kind that will strengthen Dubai’s appeal as a family-friendly destination for the summer period. This year, DET will also celebrate 10 years of the city’s official events listings platform Dubai Calendar.

The consistent use of innovative global campaigns to further highlight the city’s diverse destination proposition and reach international markets also played a major part in accelerating momentum during Q1 including the ongoing global campaign, Dubai Presents featuring Hollywood stars Jessica Alba and Zac Efron. Filmed by Director’s Guild award-winning director Craig Gillespie, Dubai Presents, which was launched in late 2021, has been rolled out in 27 countries across 16 languages via cinema, print, broadcast, out of home, digital and social media channels. It has generated over 850 million views across multiple platforms since its launch - driving enquiries, stimulating engagement and spurring bookings.

In March, the campaign featured yet another celebrity with the release of ‘Dubai Presents: Shah Rukh Khan in Dubai’, which sees the Bollywood superstar bringing into focus the best experiences that Dubai offers to international travellers.